I had a bit of a problem finding KSC on the Kaspersky Site, which is probably obvious to anyone else, but it is buried under the link at the top of their Home Page labeled Free Security Tools. Scroll down a bit and you’ll see it prominently displayed.

But my friends don’t call me “Lightning” for nothin’ and “Sunny”, neither. When he saw the confused look on my face he told me it meant I wasn’t that bright. I have since forgotten his name.

Ok, go on. Put the KSC launcher in a folder of your choice and run it. When I first ran KSC a window popped up saying there was an update, so I let it update. It didn’t take long and we were off to the races.

Note: KSC creates a sub-folder with a little over 70MB of stuff in it. I thought I should let you know beforehand. 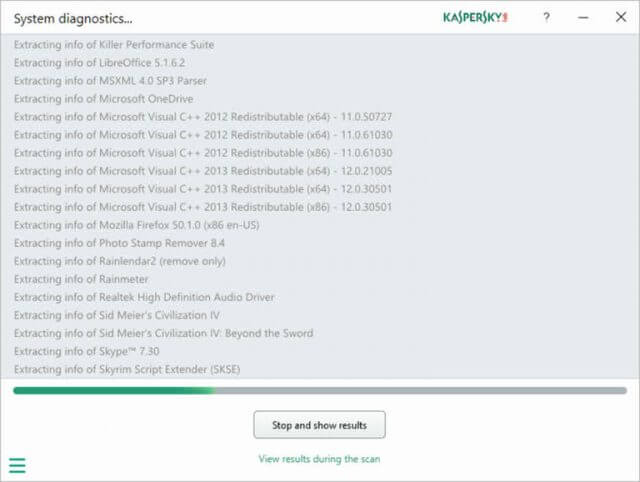 The first run of KSC took three, maybe four, minutes. (I have run several scans since and, as would be expected, they were considerably faster.) The above image shows what you can expect to see while the diagnostic scan is running. You will note there is a link at the bottom of the window labeled, “View results during the scan”. If you click that, you will be shown a window with the results as they are processed. Having done so, you will not have the option to return to this window.

It’s no big deal either way, really. Your Boredom Threshold will determine which window you prefer. 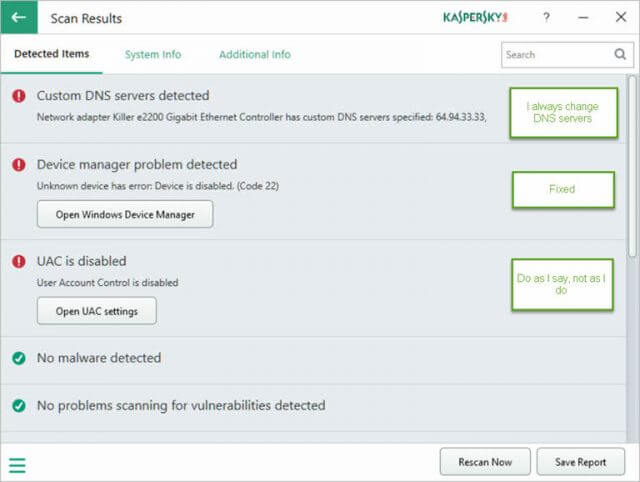 You’ll notice two more Tabs across the top labeled “System Info” and “Additional Info”. You may explore those at your leisure.

Kaspersky System Checker is a great tool. It will point out possible “wrongs” in your system setup, but will provide limited information on correcting any problems you may encounter. You are basically on your own to find a proper solution. Be prepared to open up your favorite search engine– a lot. I don’t see that as a problem for two reasons:

In the “hamburger” menu in the lower-left corner of the main window there is a Help option. It will open a PDF which is basically no help at all since it is like a four-page “About” screen. It may prove informative to some so I won’t entirely disrespect it. Besides, there isn’t much help to be had when all you have to do is hit a Scan button and read the results. A Cave Person could do it. (During these sensitive times one must be careful about offending someone, mustn’t one… politically correct and all that.)

I will give this utility a Thumbs-Up if you are prepared to do the necessary leg-work to correct the problems it may discover. In that vein, it is a worthwhile addition to any IT “Tool Box”.

I like it a lot better than the many so-called “One-Click Tweak Tools” (I never recommend those) which are ubiquitous on the Internet. At least this one doesn’t lay false claims about fixing anything. It is simply a notifier– very nice and safe.